Academy Award-nominated director Tim Hetherington was killed in Libya today while chronicling the civil crisis. He was 41. 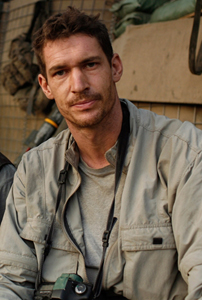 Tim Hetherington died after being hit by mortar fire in Libya, reported Reuters. Three reporters working alongside him were also injured, including Chris Hondros, who suffered a critical brain injury.

“National Geographic is devastated by the tragic news of Tim Hetherington’s death in Libya,” said Tim Kelly, President of the National Geographic Society. “This is a sad and terrible day. We join the community of dedicated photojournalists and documentarians around the world who are mourning his loss.”

Hetherington was nominated for an Academy Award this year in the Best Feature Documentary category for Restrepo, his harrowing documentary on the Afghanistan war.

“This is our first time doing all this,” Hetherington told E! News in January. “It’s all a surprise for us. We’re absolutely delighted and honored. The most important thing for us is that the film is being played wide across America and that people are responding to it because, the fact is, people are worried about Afghanistan, and we’re worried, and we want the debate to continue. We’re so delighted our film is part of that discussion.”

While details of the incident remain sketchy, Hetherington himself gave a clue as to what happened with his final Twitter entry, just hours before his death.

“In besieged Libyan city of Misrata. Indiscriminate shelling by Qaddafi forces. No sign of NATO,” he wrote.