The new trailer for Bridesmaids just hit the web and it’s even funnier than the first.

Kristen Wiig, funny? Yeah, that’s not exactly news. But if you think her Saturday Night Live sketches are a laugh a second, check out the new trailer for her upcoming gal pal comedy, Bridesmaids. 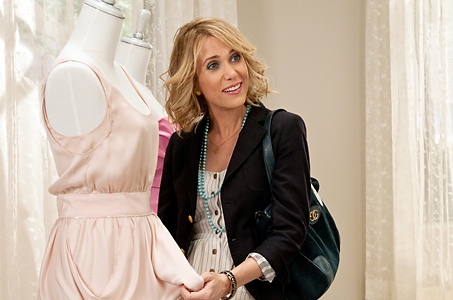 This film is getting some serious buzz and we were lucky enough to hit the set a while back. What we took away from the experience is that, this is not just a run-of-the-mill chick flick. This is some seriously funny stuff. We’re talking Forgetting Sarah Marshall funny if my buddies who have seen it are to be believed. One of the things the ladies stressed on set was that, women can sometimes be unkind to each other, but ultimately, we bond in ways no locker room jocks could ever begin to understand.

In the new trailer, we get to see the moment when Wiig’s Annie is asked by her friend (Maya Rudolph) to be her maid of honor. Last time I was asked, I may have guzzled some wine straight from the bottle too. You know what it’s like. Your life is already a mess and your best friend is getting married before you. Everything starts to unravel. Well, Annie is in the midst of an awful relationship (since her beau is played by Jon Hamm, you can kind of see why she stays) when her best buddy calls. She’s thrown into the mix with the other bridesmaids, played by Rose Byrne, Melissa McCarthy, Wendi McLendon-Covey and Ellie Kemper. Oh yes, you read that list right. The top ladies of comedy. Did you see Byrne in Get Him to the Greek? Who else could pull off a song about that part of her anatomy?

We get a glimpse of everyone’s personality, see them all get food poisoning before a dress fitting and a bit of why weddings seem to bring out the worst in people. FYI, Wiig also co-wrote the script. Check it out and let us know what you think. I’m seeing this one opening day!