Mitch and Cam wrestle with whom to make Lily’s guardian on Modern Family tonight. Royal wedding mania hits The Middle. Everyone’s first meeting stories are put under the microscope on Better with You and Happy Endings goes back to back with new episodes. 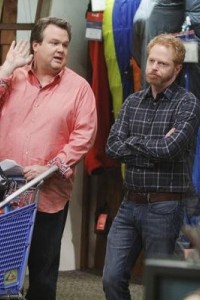 First on The Middle: Royal Wedding, Frankie goes into overdrive over the Super Bowl of all affairs, the Prince William-Kate Middleton wedding. Not only is she buying up commemorative chotchkies left and right, but Frankie even upgrades the family to a new HDTV. Mike has a revolt on his hands at work when he saves money by cutting out the free pretzels at the quarry, while Sue goes for a gig as the Shucker News Team anchor.

On Better with You: Better with Lying, Mia and Casey finally get to celebrate their engagement, but Maddie puts a damper on their party when she begins questioning the story of the couple’s meeting. This brings to question Maddie and Ben’s tale that they met while building homes for the poor. Party hosts Vicky and Joel, who might have fibbed about their own story as well, decide to kill two birds with one stone and use the engagement party to promote Joel’s campaign for country club treasurer.

At 9, it’s Modern Family: Someone to Watch Over Lily. Mitchell and Cameron start evaluating the households to determine who will get the honor of being their daughter’s legal guardian if something happens to them, but are hard pressed to agree on anyone in Mitch’s clan. The Dunphy household is a place of mayhem and Gloria gets a little too excited about the prospect of keeping the princess after Mitch & Cam’s theoretical demise, but Jay’s tough love with Manny may bump them out of the running. Meanwhile Claire sneaks off to get Luke assessed by a child psychologist, while her girls get into trouble at school. 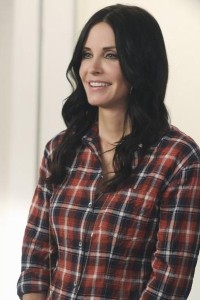 On Cougar Town: Baby’s a Rock ‘N’ Roller, Jules and Ellie debate whether parenting is harder in your 40s or your 20s. Their theories are put to the test when Ellie tricks Jules into babysitting little Stan. Jules jumps to the challenge, with a little help from Grayson, while Ellie’s free pass for the night poses a difficult conflict for Laurie’s wingman Andy. He’s forced to choose between helping Laurie as promised or enjoying his wife’s company. Bobby faces his own Sophie’s Choice when he’s offered free time on the golf course to prepare for his tournament, but has to tee off by 6 a.m.

At 10, it’s time for another Happy Endings double hit. First, on Your Couples Friends & Neighbor, Jane and Brad debate befriending sophisticated Dianne and Carl (Danielle Schneider, Brett Gelman), while Max and Dave try to figure out why Max’s munchies are disappearing from their apartment. Alex reveals Dave is a sleepwalker who eats and sings in his sleep, but when the guys borrow Jane’s teddy cam, the real explanation is even stranger.

Then in Happy Endings: Mein Coming Out, gay Max scrambles to get one of the girls to be his girlfriend to again fool his visiting parents (Alan Rachins, Caroline Aaron), so the crew pushes him to finally come out to them. Meanwhile Penny meets the man of her dreams. Doug’s perfect, except for his familiar last name, which is bad, but even worse when combined with Penny’s last name.