Halle Berry has broken her silence on her custody war with baby daddy Gabriel Aubry. 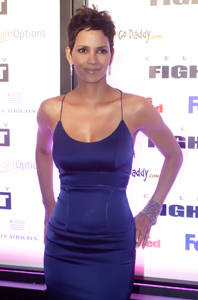 Halle Berry says that she and Gabriel Aubry hit a roadblock in their custody agreement for daughter Nahla and only a court could resolve it.

The actress told Extra, “When there’s a child involved, it’s a relief when you can resolve things in a good way. Our issues were never about fighting for her. We both know a child needs both her parents.”

Regardless of that fact, they have issues that only a court can resolve.

“What I want to say about it is sometimes, as a couple, you reach an impasse,” she explains. “We needed a court and a judge to help us work out some of the delicate issues, and I’m so happy we’ve arrived at that place — because for her sake, this is the best way.”

That all sounds really nice and mature, but things can’t be going all that great — Halle just dropped out of her highly anticipated Broadway debut in The Mountaintop because of “child custody issues,” according to show producers.

“It’s been a year full of challenges,” Berry said.

That’s one way of putting it!