Catherine Zeta-Jones’ bipolar treatment news shocked the public weeks ago. Now the actress, wife of actor Michael Douglas and mother of two, is encouraging others suffering from bipolar II disorder to seek help. 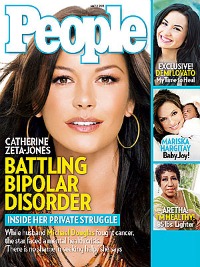 Catherine Zeta-Jones is speaking out about her struggles with bipolar II disorder. The 41-year-old actress confessed to People magazine: “This is a disorder that affects millions of people and I am one of them.”

Her reason for opening up? Helping other people with bipolar disorder. “If my revelation of having bipolar II has encouraged one person to seek help, then it is worth it. There is no need to suffer silently and there is no shame in seeking help.”

A source described as close to Catherine Zeta-Jones sheds light on her struggle with bipolar II in the weeks leading up to the star seeking treatment. “The simple things would just seem overwhelming, like going out to dinner,” says the friend. “There was just a little piece of her chipped away. It was hard to watch because I knew how hard she was trying.”