After lots of press and a few fantastic appearances, Pia Toscano’s next big stop is Dancing With the Stars. The former American Idol hopeful is on deck to perform on the hot reality dance show with a very special dancer — Mark Ballas. 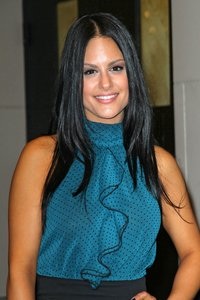 Eliminated American Idol contestant Pia Toscano is scheduled to perform on Dancing With the Stars — and she’s not doing it alone.

Pia Toscano will hit the Dancing With the Stars stage with her alleged boyfriend and DWTS pro, Mark Ballas. Okay, they won’t be singing together, so calm down. While Pia Toscano is blowing those famous pipes through the roof, Mark Ballas will be dancing with fellow pro, Karina Smirnoff.

The couple’s, wait let’s rephrase that, the duo’s performance will go down on next week’s Dancing With the Stars results show. The announcement came at the conclusion of this week’s results show.

“I just got told after Tom [Bergeron] announced it. We aren’t allowed to know stuff like that,” Ballas revealed to reporters after the show.

“I can’t tell you the song, but it will probably be something slow and romantic,” he said.

Toscano and Ballas have been making the circuits lately, sparking talk that they’re migrating into the couple zone. Toscano was recently seen taking in a concert Ballas was performing at in Los Angeles.

Ballas added of Toscano’s performance next week: “Pia … will be amazing. She is a ridiculously amazing vocalist.”

Will you tune in to Dancing With the Stars to see Hollywood’s newest are-they-or-aren’t-they couple perform on the same stage?