YouTube sensation Rebecca Black has more to worry about than what day comes after Friday — the teen singer has been getting death threats! 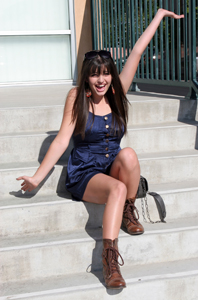 Rebecca Black’s Friday video is so hated that the poor girl is receiving death threats! The song is bad, but it’s not that bad, folks.

“In essence, the threats were related to getting the music off the Internet or they were going to kill her,” Anaheim police spokesman Sgt. Rick Martinez said. “We can’t validate how serious they are, but we do take it seriously.”

Black received one threat via email and one over the phone, and cops are keeping an eye out for any others.

“In the meantime, we are keeping an extra eye out for her.”

Rebecca Black can hardly keep a low profile. Her video for Friday has topped 100,000 views on YouTube, she has appeared on pretty much every morning show in the US, and Friday is being featured on Glee.

“We are working together with the Anaheim Police Department to ensure Rebecca’s safety at all times,” said the teen’s rep.