Another Tuesday brought another Dancing With the Stars elimination. Sadly enough, Petra Nemcova danced her last dance in the race for the mirror ball trophy.

Dancing With the Stars paid tribute to America this week, but unfortunately, America didn’t pay tribute to Petra Nemcova and her partner Dmitry Chaplin. 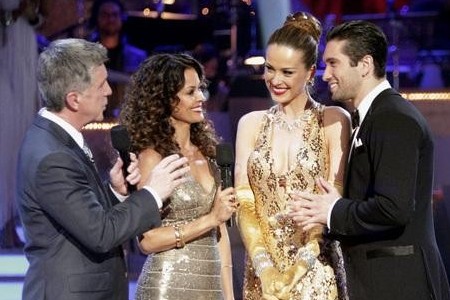 Here’s how it all went down Tuesday night during the Dancing With the Stars results show.

Tom Bergeron and Brooke Burke wasted no time in getting down to business this week. They dimmed the lights and cued the tense music before sending high-scorers, Hines Ward and Kym Johnson, to safety. Unfortunately, Kirstie Alley’s sexy dance to American Woman couldn’t keep her from cooling her heels in jeopardy land.

Romeo and Chelsie Hightower got the honor of dancing their kick-ass foxtrot again as part of the judges’ encore dance. But that wasn’t the best part of the dancing duo’s night — they were also safe for the evening. Quirky couple Mark Ballas and Chelsea Kane also joined Romeo and Chelsie in the safe zone. Even with Chris Jericho performing his best dance yet, he still couldn’t keep himself and partner Cheryl Burke out of jeopardy.

Toby Keith broke the tension and took some time to serenade the audience with two performances. Who didn’t love seeing him perform American Soldier on America night? Just fantastic!

It was back to business for Tom and Brooke as they broke some more sad news. Dmitry Chaplin and Petra Nemcova were not safe but Kendra Wilkinson, Louis Van Amstel, Ralph Macchio and Karina Smirnoff were.

Tom Bergeron and Brooke Burke sent Kirstie Alley and Chris Jericho back to safety and Petra Nemcova was left with the memory of her last Dancing With the Stars dance.

As the competition moves on, it gets harder and harder to see anyone go. Tonight’s eliminated contestant was actually pretty graceful in her dance and exit.

What did you think of Petra Nemcova’s elimination? Check out next week’s Dancing With the Stars as the dancers take on the art of the guilty pleasure.