Did the return of Sunshine Corazon spell doom for Rachel Berry on this week’s Glee? Did Holly Holliday spice up Will Schuester’s love life? Read on to find out how Gwyneth Paltrow and Charice’s return to Glee went down! 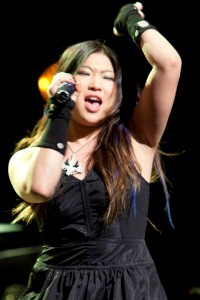 Every time Gwyneth Paltrow pops up on Glee we have to come up with a new adjective to describe her role as Holly Holliday. Frankly, it’s making us work for our money — complimentary adjectives aren’t as easy to duplicate as you might think.

On this week’s episode of Glee, A Night of Neglect, two stories were front and center — the kids’ quest to raise money for nationals and Will Schuester’s continued bad luck with the ladies and Sue Sylvester (Jane Lynch).

Glee: The F-U-N in fundraiser!

In an effort to raise money for their trip to nationals and for the Brainiacs (a school quiz club made up of Artie, Mike, Brittany and Tina), the New Directions decided to throw a benefit — A Night of Neglect. Okay, it would have been much more interesting to sell taffy at 25 cents a pop like Mr. Schue suggested, but a benefit was equally entertaining. Who came up with this brilliant plan? Holly Holliday (Gwyneth Paltrow)!

When Sue caught wind of New Directions’ attempt to throw a fundraiser to raise money for their trip to nationals, she couldn’t let that happen. She brought together a team of Will Schuester-haters, known as the “Legion of Doom,” including Dustin, director of Vocal Adrenaline, Terri, his ex-wife, and Sandy, former director of Mr. Schue’s glee club. First up? Take down Mr. Schue’s relationship with Holly Holliday via the suave charm of Dustin. Holly didn’t buy his act. Sue’s “Legion of Doom” failure number one!

The glee club’s benefit hit a little snag — no one was buying tickets. Enter Sunshine Corazon (Charice), the former student Rachel Berry (Lea Michele) sent to a crack house. She guaranteed that she’d bring in an audience and showed them her skills with Celine Dion’s All By Myself. Sunshine’s inclusion in the finale meant a big bump down for Mercedes (Amber Riley), unless she could make herself more important.

As Finn (Cory Monteith), Rachel and Quinn (Dianna Agron) tried to make A Night of Neglect epic, Mercedes’ head only got bigger. Her demands included an egg-mobile a la Lady Gaga and a puppy to dry her hands with. Yeah, totally weird.

Glee: A Night of Neglect fundraiser

The kids were stoked the night of the fundraiser but Sunshine suddenly went missing, leaving them in a panic. 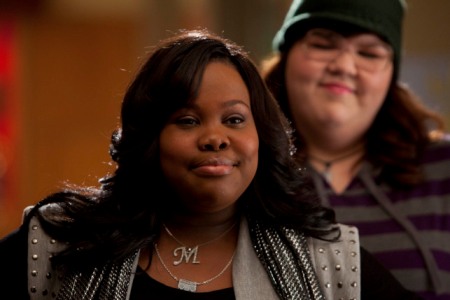 The show had to go on, however. Tina kicked A Night of Neglect off with I Follow Rivers but got heckled off the stage by Sue’s Heckling Club that included her assistant Becky. New plan, give the hecklers taffy! Yeah, not going to work.

Holly Holliday to the rescue! She took the hecklers down and performed a crazy-good rendition of Adele’s Turning Tables. This performance was exactly why we said she needs to be a full-blown cast member — wow!

With Sunshine missing, it was up to Rachel to convince Mercedes to take her place, but oops, Mercedes went MIA. Rachel found her sulking in the car. After a heartfelt talk about Mercedes’ true insecurities, she agreed to close the show with Aretha Franklin’s Ain’t No Way. Her performance locked Sandy into funding the entire trip to nationals. Sue’s “Legion of Doom” failure number two.

On a sad note, it looks like Holly Holliday and Gwyneth Paltrow are once again exiting Glee and Will Schuester’s life. She took a job in Cleveland saying adios to Mr. Schue. This does leave a new opening for Emma and Will to reunite as earlier in the show it was revealed it was quits for her and Carl (John Stamos).

With Sue’s “Legion of Doom” failing one by one, it’s up to Terri to carry out Sue’s plan. Will she succeed? Keep watching Glee! Next week is the big Born This Way episode, so don’t forget to tune in.