SheKnows got on the Cougar Town set to visit for some girl talk with Courteney Cox. Cox dished Cougar Town, Friends and Scream 4, as well as living under the media microscope, especially while she and David Arquette wrestle with a very public trial separation. 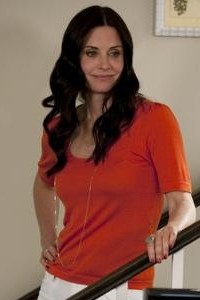 SheKnows: There’s a warmth to Cougar Town that makes viewers want to sit down and share a glass of wine with you guys. At what point did you feel that energy take hold?

Courteney Cox: It was a big thing for (producers Bill Lawrence, Kevin Biegel and myself) when we were casting. We definitely have a no (expletive) policy. It was important that everyone was a great person, and you can tell when someone comes into the room to read. When Busy [Philipps, Laurie] came in, she by far was the best actor and she was also so nice. I had known Christa (Miller, Ellie), so that was no issue.

SheKnows: Did you ever think you’d have a second show where the cast clicked as well in front of and behind the camera?

Courteney Cox: I knew that would be the only way that I would do it. There would be no point in doing it unless everyone got along great and it was fun, because life’s short. Even on the show Dirt, which wasn’t a big success at all, I loved every one of those characters. I know there can be shows where there are real jerks, but I haven’t experienced that yet.

SheKnows: When Jules and Grayson paired up so early in the series, were you concerned about getting stuck?

Courteney Cox: Yes. I was nervous at first. If it works, it’s going to keep happening and as soon as it doesn’t work, he’s so gone. [Laughs] I just love Bill and Kevin’s take on it. This is not going to be an on again-off again thing you’re so used to seeing, (like) Rachel and Ross…I think once me and Chandler did it, we stayed together, but I can’t remember one episode from Friends. I have a terrible memory and I’m checking that out in therapy now.

Courteney Cox: This show is so much my passion and so was Friends, but now I’m older. It’s tailor made for my personality. I’m just having a ball. 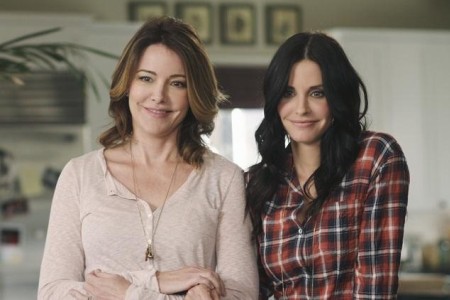 SheKnows: Do you miss the Friends live audience?

Courteney Cox: I’m not huge on having an audience. Jennifer Aniston loves it. It made me nervous, even in year ten. It’s just too much pressure. Also, I like that you get to have more than one chance at it. Monday through Friday doing the same show? I’d rather do a new scene every day and move on. I get bored. But let me tell you something, I loved Friends. I’d have done a couple of more years. That was amazing, but this is easier for me in some ways.

SheKnows: What was it like to work with Aniston again, and might we see her back on Cougar Town?

Courteney Cox: It didn’t feel like Monica and Rachel at all, which is great, because our characters are just different. It just felt natural. We had a ball. I loved working with Lisa (Kudrow). That was really fun, too. I doubt (we’ll get Jennifer back on Cougar Town). She literally, I think, did four movies this year.

SheKnows: Matthew Perry recently said he wishes he could go back to the Friends heyday and be more present and less focused on who’s landed the next gig. Do you share that feeling?

Courteney Cox: I have a lot of things to say about what you just said. There were a lot of reasons he wasn’t present. I actually was present. I may have been hyper-vigilant. There is a lot of stuff that can mess with your ego, being on a show that’s a straight ensemble of six people. You’re all equal. Everyone wants to get out early. It was just hard. It was a lot of learning for me. If anything, the one [regret from] back in those days is that I wish I didn’t spend time comparing. It was a waste of time. We all have our path and we all did pretty well.

SheKnows: Have the trappings of fame and the media scrutiny gotten easier to deal with since then?

Courteney Cox: I’m kind of used to it, but as I get older I’m getting a little more sensitive, so it might be harder in some ways. Because I love this show so much and feel so thankful, I do take anything that involves the show personally. Obviously my life is kind of crazy right now and I’m getting a lot of that. It’s probably a little harder than it used to be. I think I didn’t notice. 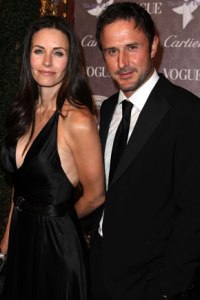 SheKnows: Has clocking in at Cougar Town offered you an escape during a difficult time in your life?

Courteney Cox: Oh, yeah. Thank God for the show. There have been times when Bill has said, “Are you all right? Do we need to take a break?” I’m like, “Are you kidding? This is my saving grace.”

SheKnows: Do you let your daughter watch the show?

Courteney Cox: If I say, “Yes,” am I a bad mom? I do. I tell her to close her eyes when it’s inappropriate and she does. She knows everyone. She thinks that Dan Byrd is her brother. She calls him Brownie. This is her family.

SheKnows: Coming from your Cougar Town comfort zone, how hard was it to slip back into Scream mode for Scream 4 last summer?

Courteney Cox: The last movie was ten years ago. People have changed. People are cooler than they used to be. I was like, “Gale Weathers is back!” That character is over the top and Dewey was Dewey. I realized all the actors on the set, the new group, were very subdued and quiet. It was like, “Are they going to talk any louder at all? Because they’re very cool, and I’m older and not as cool.” I thought, “I’m going to stand out like a sore thumb in this crowd,” but I stuck to my character and we’ll see what happens.