The web was abuzz when Real Housewives of New York City’s Jill Zarin showed up at the TV Land Awards with a brand new face. Many speculated that the 47-year-old had a facelift and a nose job, however, Zarin insists her new looks required no plastic surgery. 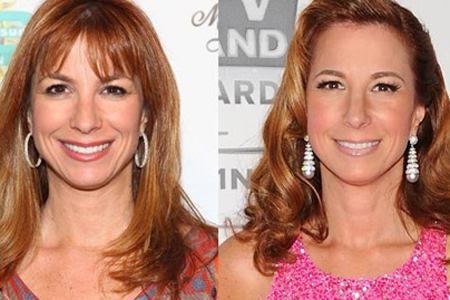 A liquid facelift uses only injectables, says Zarin. She spends $1,000-$3,000 for treatments in which her dermatologist, Dr. Patricia Wexler, uses fillers (Restylane) along the jaw line and up the sides of her face. Zarin says she has been getting treatments for a year.

She says it hurts a little, but the pain is minimal. “I won’t say it doesn’t hurt, but it’s 100 percent worth it. She took ten years off my face.”

The Real Housewives of NYC star also admits to getting Botox on her forehead, in between her eyes and in her neck for 10 years, but denies a nose job.

“[Makeup artist Jim Crawford] put brown contouring makeup on my nose and thinned it out,” she says. He also explained that getting rid of the bangs also gave her a new look.

Would she consider plastic surgery in the future? “All the sudden if I woke up with jowls, that’s it, I’m going under the knife,” she admits.

Tell us: Do you like Jill Zarin’s new face?