Ashley Tisdale famously played Sharpay in the High School Musical movies and now the actress who currently stars in the CW’s Hellcats has her own Sharpay movie. Sharpay’s Fabulous Adventure takes Tisdale’s character and graduates her to the fashion big time. 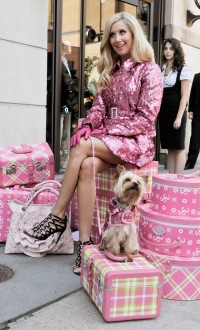 Ashley Tisdale sat down to discuss Sharpay’s Fabulous Adventure and also chimed in on her first celebrity crush, first kiss and how Tisdale’s fashion sense differs completely from the outlandish fashions of Sharpay!

SheKnows: How would you describe the character of Sharpay? People just love her from the High School Musical movies!

Ashley Tisdale: Sharpay is a fun-loving, pink diva. She has always had everything she ever wanted, but that soon changes in the new movie. She goes to New York to fulfill her dream of being on Broadway, but it’s not as easy as she thought it was going to be.

SheKnows: You’re the star of this movie, how does it feel to have your own High School Musical movie?

Ashley Tisdale: It feels great! It was really strange not having Zac (Efron), Vanessa (Hudgens) and Corbin (Bleu) around me because they were my comfort zone on High School Musical. It was easy to play Sharpay when they were around, but now she’s a little different and I’m a little different, too. For starters, I am an executive producer on the movie. That was definitely different to anything I’d ever done before!

SheKnows: How was being an executive producer? 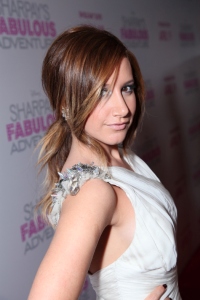 For the love of fashion

SheKnows: Now, both you and your character Sharpay love fashion. How would you describe Sharpay’s sense of style?

Ashley Tisdale: Sharpay’s sense of style is a little out there. She’s always dripping in rhinestones no matter what she’s wearing and she loves pink. She has pink outfits, pink accessories and even pink luggage!

SheKnows: Did you have much input into the fashion of Sharpay’s Fabulous Adventure?

Ashley Tisdale: I’ve always had loads of input into Sharpay. I’ve always thought about what she would wear and how she would wear things. I had a great relationship with the wardrobe stylist on the High School Musical movies, so we’d brainstorm together and come up with lots of fun things for Sharpay to wear.

SheKnows: How does your sense of style differ from Sharpay’s and what are your favorite things to wear?

Ashley Tisdale: My own sense of style is completely different. Personally, I wouldn’t wear some of the things Sharpay wears. I’m not really into pink, glitter and rhinestones. I like to mix it up. I can go from wearing something really chic to something very summery and Californian — but then, the next day, I’ll wear a rocker jacket or a cute bohemian dress.

SheKnows: Then how would you describe your own sense of style?

Ashley Tisdale: I’m more of a jeans girl and I prefer the beach look to Sharpay’s style. I’m not really into the bright colors that Sharpay wears. My own personal style is much more relaxed.

SheKnows: Do you have someone you model yourself after?

SheKnows: We’re curious as to a couple of your “firsts.” First, who was your first celebrity crush? 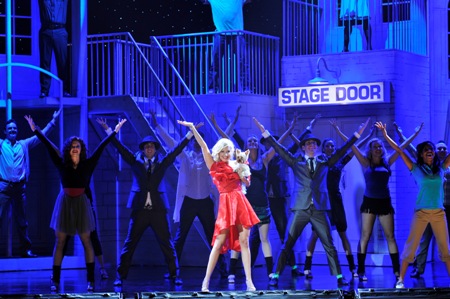 Ashley Tisdale: My first celebrity crush was Leonardo DiCaprio. I thought he looked so cute when I saw him in the movie, Titanic. I had a picture of him on my bedroom wall. I think it was a poster taken from a magazine, but it had a lovely blue backdrop and Leo was wearing a black T-shirt. His eyes were ice blue! I thought he was the most gorgeous guy I’d ever seen.

SheKnows: OK, if you can, what was your first kiss?

Ashley Tisdale: My first kiss was with an actor friend that I’d known for a very long time. I wasn’t super young when it happened; I was a little older. What do I remember about the kiss? I remember it being not as exciting as everybody tells you… But maybe it was the guy? I have no idea!