M. Night Shyamalan is going back to film school. Well, not yet — but he will be if writer Chris Baker gets his way!

Related story The Last Airbender: Inside Airbender with Nicola Peltz 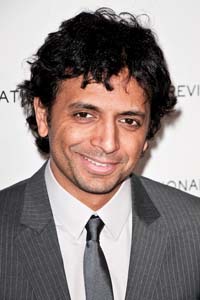 Filmmaker M. Night Shyamalan was heralded as the next big thing in movies when he released The Sixth Sense back in 1999. Now, it’s hard to get anyone to take him seriously after flops like The Last Airbender, Lady in the Water and The Happening.

Now, author Chris Baker is trying to raise $150,000 for the flailing director. Why? To send him back to film school. Ouch!

Baker said he got the idea after moviegoers laughed when a voiceover in the movie trailer for his upcoming film Devil said, “From the mind of M. Night Shyamalan.”

Baker and two of his buddies have raised $520 so far toward sending Shyamalan to New York University’s Tisch School of the Arts.

Does Baker expect the director to take the money?

“We want to do a stunt where we present him with a giant check. Obviously, as he’s a multi-millionaire, he’ll refuse it,” Baker said.

Their back-up plan is to establish a film festival in New York City for young filmmakers aspiring to attend NYU. The winner will receive the money as a scholarship in Shyamalan’s name.

Seems like a plausible idea — can’t improve Shyamalan’s work? Then get someone better to take his place. However, he’s not likely to go anywhere anytime soon: He’s working on One Thousand A.E. with Will Smith and Jaden Smith.

What do you think of the fundraising for M. Night Shyamalan: Hilarious or seriously mean?