Vanessa Hudgens was spotted licking a suspicious white substance off her fingers at Coachella. Was it drugs? 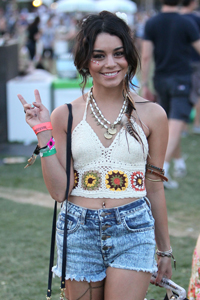 Sucker Punch star Vanessa Hudgens was spotted licking a strange white substance off her fingers that she scooped out of a pouch at Coachella. Was it drugs?

Blogger Perez Hilton posted the photos and said Hudgens repeatedly dipped into the bag for a “snack.”

She “kept herself busy by sampling a lot of substances!” wrote Hilton.

“Whatever she was putting in her mouth, it was white and kept in a zippered pouch!”

Drugs would certainly explain the ridiculous getups the star was wearing all weekend, but alas, her rep says it just ain’t the case.

Their story: It was just white chocolate.

White chocolate that was shared amongst her friends all weekend. Definitely not cocaine, ground-up ecstasy or any other drug.

read on for more vanessa hudgens