Elizabeth Banks is in talks to play Effie Trinket in Hunger Games. So what is this about and why does this film seem to make as much casting news as Spider-Man? We’ll explain. 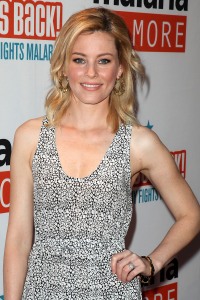 Does it seem like Hunger Games is all over the news lately? The upcoming film is based on the novels by Suzanne Collins about the not-too-distant future. America has collapsed and been renamed Panem. Their form of entertainment? Two representatives…young ones…are selected from each of Panem’s 12 districts. They must fight to the death until only one remains. The message? Even children aren’t free from the new government’s power. Pretty intense for a young adult novel.

The cast of The Hunger Games, directed by Gary Ross, is impressive, including Oscar-nominated Jennifer Lawrence as Katniss, the main character, and Josh Hutcherson and Liam Hemsworth as the other two points of a love triangle (Peeta and Gale respectively). Now the fantastic Elizabeth Banks is up for the role of Effie Trinket, the guide who accompanies Katniss and Peeta on their journey.

The books…well, they’re incredibly affecting. It’s easy to see how they’d work on screen. And everyone is looking for something as compelling as Harry Potter these days. So, have you read the books? What do you think of the casting? Let us know below.