Boardwalk Empire star Paz de la Huerta has been charged with assault after an attack against The City star Samantha Swetra last month. 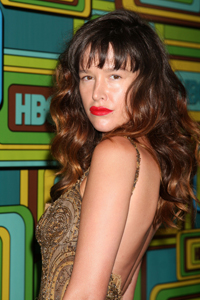 Paz de la Huerta has more on her plate than starring in the critically-acclaimed, award-winning show Boardwalk Empire. Her bad behavior has gotten her charged with assault!

It all stems from an incident at the Standard in New York City last month, where Paz allegedly threw a glass at The City star Samantha Swetra and punched her in the face — all because Swetra objected to a very drunk Paz hitting on her friend.

The judge also issued a restraining order against Paz, prohibiting her from so much as contacting Swetra on Facebook!

Paz is a fun gal. You might recall the photos plastered all over the web of her literally falling down drunk after the Golden Globe Awards and how she was turned away from an after party because she was too wasted.

In fact, she’s so fun that on the night of her arrest prosecutors say Paz thought she was perfectly within her bounds because she’s on what she considers to be a better show.

Paz de la Huerta is due back in court on May 19.