In an upcoming interview, Demi Lovato tells 20/20 that she started cutting at the tender age of 11 because she couldn’t handle the pressure of having to be perfect. 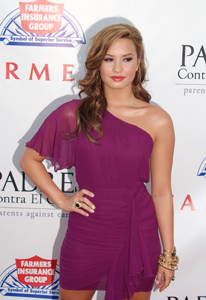 Demi Lovato entered rehab last fall for cutting, bulimia, emotional and other rumored issues — and now the young actress told 20/20 she started self-injuring when she was just 11 years old.

The now 18-year-old Lovato said that by cutting she found “a way of expressing my own shame, of myself, on my own body.”

“I was matching the inside to the outside,” she explained. “And there were some times where my emotions were just so built up, I didn’t know what to do. The only way that I could get instant gratification was through an immediate release on myself.”

Lovato now has a tattoo that reads “Stay Strong” on one wrist and a small heart signifying the support of her fans on the other, right where she used to cut.

Demi tweeted the news of her interview: “10 days until my GMA and 20/20 interview. The 20/20 one will be more in depth. I’m so excited to really share my story with you all.”

The complete Demi Lovato interview will air on 20/20 April 22.

Meanwhile, Lovato is making another big change in her life: Leaving her hot Disney show Sonny with a Chance.

“It made sense for me to go ahead and leave the show to focus on my music,” Lovato told People. “It’s kind of sad for me that a chapter of my life has ended but there couldn’t be a better time for me to move on.”

“I don’t think going back to Sonny would be healthy for my recovery,” says the 18-year-old actress-singer. “Being in front of a camera would make me nervous.”

Disney seems cool with her decision.

“We respect Demi’s decision to focus fulltime on her music and not immediately return to her acting career,” said a rep for the mouse house in a statement. “She is a talented young woman and our hearts are with her as she continues to take action to improve her health and bounce back from adversity.”

Demi Lovato is already well on her way.