Beyonce is back with a new single. Listen here first! 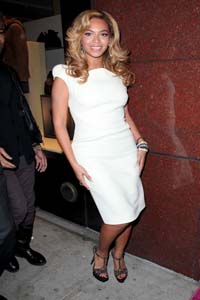 Listen up, Beyonce fans! Queen B has returned to reclaim her throne with her latest single, Girls (Who Run the World). The song is pure Beyonce girl power with lyrics that include “Some of them men think they freak this like we do/ But no they don’t/ Make your check come at they neck/ Disrespect us no they won’t.”

Sounds like Sasha Fierce is back! The song relies heavily on samples from DJ Diplo and Switch’s Pon de Floor. The song is sort of reminiscent of Destiny’s Child’s hit Lose My Breath.

Girls (Who Run the World) is the first single off Beyonce’s unnamed new album scheduled for release in June. The album will mark the first Beyonce release without the watchful eye of her father, Matthew Knowles — she fired him as her manager earlier this month.

Beyonce is reportedly working with a ton of producers and hitmakers on the album, according to one collaborator, Sleigh Bells’ Derek Miller.

“I actually have no idea if the collaboration will ever be released,” Miller told Entertainment Weekly recently. “Beyonce works with whoever she wants to work with, probably 30 or 40 producers. It’s a totally different world from what I’m used to. So for me it’s just exciting to hear something that I worked on but I can’t really say any more than that.”

We’re loving the new song — and it sounds like the new album will be just as hot.

Tell us: What do you think of Beyonce’s new single?