Halle Berry has dropped out of a Broadway play to deal with ongoing custody issues. 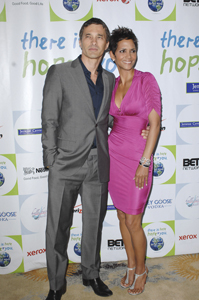 Halle Berry has once again been forced to miss out on work to take care of business — personal business. The actress has backed out of her planned Broadway debut because of ongoing custody issues between her and baby daddy Gabriel Aubry.

Producers of The Mountaintop said Berry will “not be appearing in the role due to child custody issues.”

The play, starring Samuel L. Jackson and written by award-winning playwright Katori Hall, is set at the Lorraine Hotel in Memphis, where Dr. Martin Luther King was preparing for a demonstration before he was shot to death on the balcony. Jackson will play King; Berry was to play a maid at the establishment.

This isn’t the first time Halle has had to back out of a role because of this custody mess. She gave up her role in New Year’s Eve earlier this year to Katherine Heigl when Aubry raised a fuss about her taking their daughter to New York while filming instead of leaving little Nahla with him in Los Angeles. She later rejoined the cast in a different, smaller role.

But don’t cry for Halle, because she doesn’t seem to be sweating it. She chose to trot out boyfriend Olivier Martinez on the red carpet at the same time this announcement was made, so we think her point is: “I’ll be just fine.”