Brad Pitt got dumped one time, long ago — and he says his breakup with then-fiancée Jill Schoelen shaped how he feels about money. 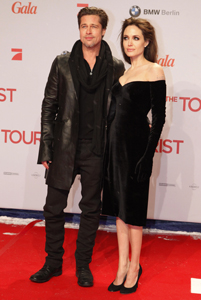 Someone, somewhere actually dumped Brad Pitt, can you believe it? Once, way back in the day, one of the many fiancées he has collected throughout the years actually kicked him to the curb — and nearly bankrupted him in the process.

Way back in 1989 — two years before his hot and steamy appearance in Thelma and Louis — Pitt was engaged to actress Jill Schoelen. The couple met on the set of the slasher flick Cutting Class and got engaged soon after.

Then she dumped him.

“She called me up in Los Angeles and was crying on the phone,” Pitt told The Sun. “She was lonely and there was a huge drama. At this point I had $800 to my name and I spent $600 of it getting a ticket from Los Angeles to Hungary to see her.

“I got there, went straight to the set where she was filming and that night we went out to dinner. She told me that she had fallen in love with the director of the film. I was so shocked I said, ‘I’m outta here.'”

The experience left him appreciative of his later fame, because it means he has money.

“I spent my night in Budapest, sitting on a bench, smoking, with just a local bum to talk to who couldn’t speak English. These are the days and nights you remember when you have success. I returned to America absolutely broke. This is why recognition does not bother me too much.”

These days, of course, Brad Pitt has to worry about neither love nor money — he and partner Angelina Jolie are fabulously wealthy and traipse around the world with their brood of six kids.