Dancing With the Stars celebrated America this week with eye-popping patriotic dances by Hines Ward and Chelsea Kane! Whose dancing shoes fell flat in this week’s race for the mirror ball? Read on to find out. 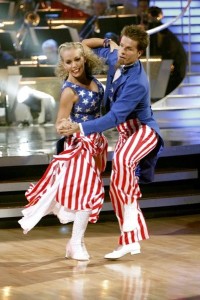 It was hard to separate from the pack this week. Hines Ward just can’t be contained on the dance floor, but he better watch out. Chelsea Kane was again hot on his heels in this week’s salute to America.

Ralph Macchio and Karina Smirnoff
It was definitely not the finest week for Ralph Macchio. The consistently good dancer fell flat with lack of flair for the samba. The only way to describe it would be through the kind words of Bruno Tonioli: “The line dance and two-step was very, very good, but we’re looking for a samba. You do a character very, very well. Give me sex, man!”

We’re pretty sure Len Goodman gets the creepy comment of the night: “It’s so nice to see Cheryl showing off the Rocky Mountains there.” Use your imagination, people.

Romeo and Chelsie Hightower
Who knew dancing the foxtrot could be so cool? Romeo knew, that’s who. Romeo and Chelsie, the young, hip kids of the dance floor, took a dated dance and made it somehow fit with their own vibe. Of course Len wasn’t completely thrilled with that but Carrie Ann said, “That was so cool and so sophisticated! You have your own unique style.” 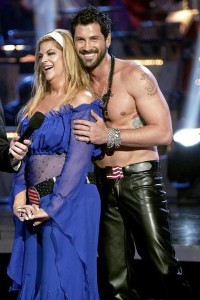 Hines Ward and Kym Johnson
We hate to be biased, but Hines Ward and Kym Johnson are just a joy to watch. Their rumba this week was just brilliant! He looked so dashing in his white service uniform. Okay, that was off subject. We weren’t the only ones loving this football player’s off-the-field moves. Bruno gushed, “Ease of move, musicality, and just the right amount of sensuality to make the ladies swoon!”

Kirstie Alley and Maksim Chmerkovskiy
According to the judges, Kirstie Alley danced her best dance yet with her foxy foxtrot. This leaves us wondering why she got such a low score. She didn’t lose a shoe or fall on the ground so maybe that was the problem. Kirstie and Maks had some hip-shaking moves we never thought we’d see from Alley — and we loved it but just wish she could have had higher scores.

Chelsea Kane and Mark Ballas
Chelsea Kane has got the best facial expressions when she dances! She’s cute as a button. Her samba had so much pizzazz this week, she fit right in with the fireworks! Mark Ballas knows just how to bring her quirky side out and showcases that week after week. She’s killing it! Another creepy Len remark: “Yum, yum, what a bum! This was real good fun!”

Okay, so if we’re counting right, out of eight couples, six showed a score of 26 or 22 — interesting. Who was your favorite this week? Do you think Chelsea Kane could have squeezed out an extra point to tie Hines Ward for first place? Did Ralph Macchio belong in the bottom with Kendra Wilkinson and Petra Nemcova? Don’t forget to check out the results show on Tuesday night and check back to SheKnows for all your Dancing With the Stars recaps and results!