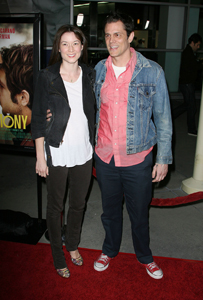 Get ready world: Another Jackass is nigh upon us. No, not another movie full of guys getting kicked in the junk and covered in feces — a baby Jackass. Johnny Knoxville and his wife Naomi are expecting again!

The Jackass 3D star shared the news on Facebook.

“My wife Naomi and I are super happy to announce that we are having another little bambino in the fall,” Knoxville wrote.

“My 15-year-old daughter Madison is very excited about it, and her 16-month-old little brother Rocko has, well, no clue. Wahoo!!”

This new little stunt kid will be the second child Knoxville shares with wife Naomi, whom the 40-year-old married last September. Madison is his daughter with first wife Melanie, from whom he separated amidst rumors of a fling with Jessica Simpson.

All that is in the past now, however. Yay babies!