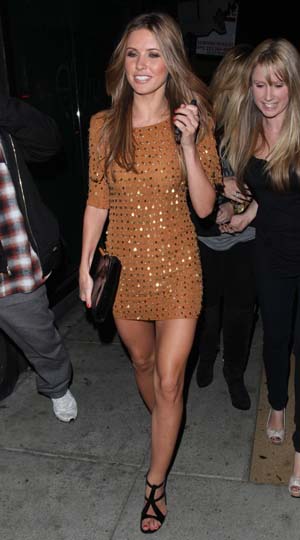 Former Dancing With the Stars and The Hills reality star Audrina Patridge is back on TV — this time on her own VH1 show Audrina. The show basically revolves around Audrina, her now-ex boyfriend Corey Bohan and her family, including sisters Casey Patridge and Samantha Patridge and her drunken mom, Lynn Patridge.

The first episode was a real snoozefest — it basically revolved around introducing us to Patridge’s life, family and gratuitous shots of her bikini shoots. Oh yes, she’s got a hot body and some style — but there’s not a whole lot going on upstairs, sadly.

Oh, the show also featured a lot of fighting between Casey and Lynn, along with lots of complaints from Audrina about the paparazzi. That’s it. Previews for the upcoming episodes showed some excitement, including fights and more fights.

“I honestly did not say ‘no’ to anything they wanted to shoot,” Patridge recently told People. “They caught everything on camera, so it was very organic.”

We’re not sure why they opted to give Patridge her own reality show — she wasn’t that interesting on The Hills, so why would they think she’d be more entertaining on her own show? Her mom will end up being the real star here — unless, of course, Justin Bobby shows up.