Winter is coming! The new HBO series Game of Thrones premiered last night and gave us our introduction to the world created by George R. R. Martin. So, did it thrill or fall flat? We’ll let you know. 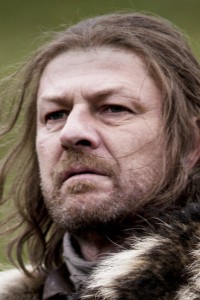 I’m a huge fan of the Game of Thrones series created by George R. R. Martin, so I have been impatiently waiting for the HBO series for weeks. (It’s been in development for a zillion years, but I’m a recent convert.) Since it’s a rather complicated story, I wanted to have someone who hasn’t read them as a viewing companion. My husband stepped into that particular role.

Here is the official synopsis, since anything I write would take days to read: “Summers span decades. Winters can last a lifetime. And the struggle for the Iron Throne has begun. It will stretch from the south where the heat breeds plots, lusts and intrigues; to the vast and savage eastern lands; all the way to the frozen north, where an 800-foot wall of ice protects the kingdom from the dark forces that lie beyond. Kings and queens, knights and renegades, liars, lords and honest men…all will play the ‘Game of Thrones.'”
More than that would give out too many spoilers. This is a hard one to sum up.

The book has a pretty large cast of characters and a ton of exposition. From what we saw last night, large chunks of that were taken out or expressed through facial expressions and scenery. Still, there were definitely moments when we paused the show so I could explain to my husband what the Wall was and what the White Walkers were. For me, every moment produced a squeal of excitement. Oh look! There’s the perfectly cast Tyrion Lannister (Peter Dinklage). Oh my gosh, look at Catelyn Stark (Michelle Fairley) glare at her husband’s son by another woman! Adorable dire wolves! Yes, I’m difficult to watch television with. 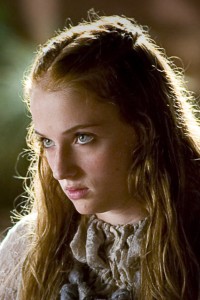 The story is about boldness and courage, lies and liars and the first episode has them all. The show is perfectly cast. Sean Bean was born to play Eddard Stark, the patriarch of the Stark clan. When he explains to his young son why he had to carry out a death sentence himself, you have everything you need to know about the character right there. The first episode was gripping and thrilling…for me. My husband really enjoyed it, but he was a little confused. Please, don’t let that stop you from watching. (You know they’ll be playing it over and over in case you missed it.) In fact, I’d highly recommend that you check out HBO.com and check out the character profiles. They’re short and they give a great preview for the show. If you’re a fan already, you won’t need them…unless you’d like to get a visual to add to your reading.

Please note, this is not a show for children. There is nudity, language…pretty much everything you’d expect from an HBO show. And it works. It’s in the books, it’s appropriate for the subject, but it’s not for your younger kids. That said, the first episode more than proved that Game of Thrones lives up to being the most anticipated television series of the year.