Water for Elephants is back on the bestseller list with the film adaptation starring Reese Witherspoon, Robert Pattinson and Christoph Waltz opening in theaters on April 22. 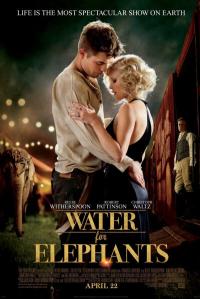 Water for Elephants is the must-see movie of the spring starring Reese Witherspoon and Robert Pattinson, but what is it about the book that makes the story so magical? With a romance as big as The Notebook and a plot to rival, Water for Elephants will leave readers feeling ready to conquer life and the unexpected turns it can take.

The book is fiction, but every element of the story feels realistic. A young veterinarian student, about to graduate, drops out of college and joins the circus when tragedy strikes. While traveling with the Benzini Brothers Most Spectacular Show on Earth, he is tasked with caring for the animals and falls in love with one of the married performers. There is also a fairy tale quality to the story, in the same vein of stories like Big Fish, which makes the plot a masterpiece of fiction.

I’ve never wanted to live in the Great Depression era until reading Water for Elephants. Despite the rough and realistic depiction of poverty and animal abuse, Gruen captures the camaraderie among the characters and finds a way to make grungy, dirty circus life romantic and fascinating. The story pulls you in until the very end, leaving a reinvigorated hope and excitement to live life. Water for Elephants deserves to be included among the best of literature. If you haven’t read it yet, go pick up a copy now.

Sara Gruen moved to the United States from Canada in 1999 for a technical writing job. When she got laid off two years later, she decided to try her hand at writing fiction. Gruen’s Water for Elephants has become one of the most beloved and bestselling novels of our time. This instant number one New York Times bestseller is now available in 44 languages and has over 3 million copies in print worldwide. Gruen lives in the South with her husband, sons, horses, dogs, cats and a goat. For more information, visit Gruen’s website.