Jennifer Aniston may be 42 years old, but she looks a full decade younger! What’s her secret? The actress recently opened up about Botox, plastic surgery and aging in Hollywood.

Jennifer Aniston is known as much for her sunny blond hair, fabulous skin and figure as she is for her movies (and, OK, her dating life). The single star of Just Go with It told Red magazine that aging naturally is “beautiful,” however, Aniston admits she has used Botox in the past, but didn’t like its “hard” effects.

“I make my living from my expressions, so it’s not a great thing to do,” she said in a previous interview. 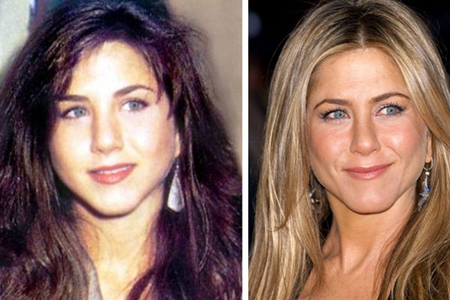 So how does she keep her skin so radiant? The former Friends star told Red she uses “state-of-the-art serums” (unfortunately she didn’t name specifics) and a California facialist.

Even though it has been rumored that Aniston had a nose job earlier in her career, she denies it and says too much plastic surgery can make you look older.

“A lot of women go too far and end up looking a hell of a lot older than they actually are and it sort of has a reverse effect. So talk to me in 10 years,” she said.

Aniston admits, however, she will not totally rule out plastic surgery as she gets older. “I will never, ever say ‘never’ about anything. And I don’t think there’s anything wrong with making yourself feel better.”

Check out Jennifer Aniston at a younger age — and today. Whatever she is doing, she seems to look better with age!