Nikki Reed may want to plan a weekend-long movie date with her boyfriend Paul McDonald — the singer says he has never seen a Twilight film! 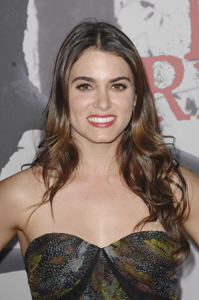 Nikki Reed is treated like just a normal girl by her boyfriend, former American Idol contestant Paul McDonald — so much so that the singer has never even seen any of her Twilight movies!

McDonald, who was eliminated from American Idol last week, admitted his lack of Twilight knowledge.

“I haven’t seen any of the Twilights yet. I support her whatever she’s doing,” McDonald said of Reed, adding that his girl is “ridiculously talented.”

“Now I have to get Twilight and watch them all.”

It all seems to be part and parcel of McDonald’s laid-back style. He’s no diva and he sure doesn’t think Reed is, either.

“I didn’t plan on dating anybody or anything like that, it just kind of fell into place. It’s funny — my grandmother called me up [asking] ‘Who’s this new girlfriend you got? I read it in the magazines,'” he said. “I’m just now getting used to all this, I just treat her like she’s a normal girl to me. She just happens to be ridiculously talented.”

Nikki Reed has finished up her part filming Breaking Dawn Part 2 and has lots of time to spend with her new man.