Camera-shy couple Robert Pattinson and Kristen Stewart couldn’t escape the shutterbugs as they were photographed kissing at the Water for Elephants post-premiere party. 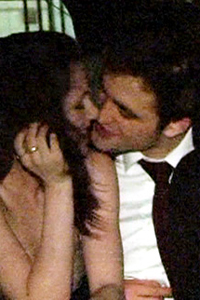 Edward and Bella were caught making out! Robert Pattinson and Kristen Stewart usually avoid any signs of public PDA (unless they are in Twilight-mode onscreen), but at the party following the NYC premiere of Water for Elephants, they couldn’t hide their feelings.

Pattinson walked the red carpet and posed for pictures at the premiere solo, but caught up with Stewart at the after party at Le Cirque. Sources say they were seen “hand in hand” — and even hung out with Pattinson’s parents! She reportedly “got along together very well” with his parents.

The couple was inseparable the entire night, sipping on beer and chatting with friends. “They were a cute couple,” the insider tells Us Magazine. “She looked amazing.”

As the night wore on, they were photographed cuddling and kissing in the backseat of their car as they left.

Pattinson and Stewart weren’t the only lovebirds in attendance — newlyweds Reese Witherspoon and Jim Toth were also spotted kissing! “People were coming up to her and wanted to cheers her wedding, she looked very happy,” an insider says.

Pattinson and Witherspoon star in Water for Elephants, while the hunky Brit and Stewart just finished filming Breaking Dawn (parts 1 and 2), the final installment in the Twilight franchise.