Can’t get enough Taylor Lautner? Well, we’ve got the brand new poster for his next film, Abduction. Yeah, you’re going to want to print this out and put it on your wall to gaze at. Trust us. 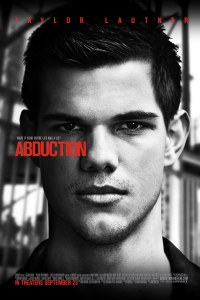 The Twilight Saga still has two movies to go, and already its stars are breaking out of their iconic roles to do other things. Kristen Stewart is about to take on a fairy tale in Snow White and the Huntsman. Robert Pattinson has already garnered fantastic reviews for his work in the upcoming Water for Elephants with Reese Witherspoon. And now everyone’s favorite werewolf Taylor Lautner has Abduction.

The first poster was just released and if you’re Team Jacob, you’re going to be drooling over this one. No, Taylor doesn’t have his shirt off or anything. Sorry. But it’s a great black and white shot of his face with those pretty brown eyes.

Here is the deal. Nathan Harper (Lautner) has always felt like his life wasn’t really his own. When he sees his picture on a missing person’s website, he realizes his parents aren’t his parents and his life is all a lie. As he tries to piece together his identity, he finds that there is more to the story than even he could have imagined.

A team of trained killers is targeting Nathan and he goes on the run with his only trusted friend, his neighbor Karen (Lily Collins, who is strangely also playing Snow White in a different film). Nathan discovers that he can no longer run. He must face this head-on to find out who he really is.

Check out the poster, and when you’re done staring at it…maybe sometime next week, let us know what you think.