True Blood actor Stephen Moyer pulled out of the Toyota Pro Celebrity Race after a crash during qualifying left his wife and show producers quaking. 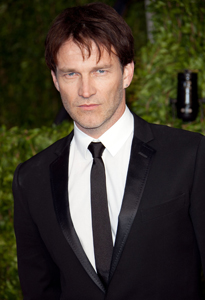 Stephen Moyer had a good chance of winning the Toyota Pro Celebrity Race on Saturday, but True Blood producers wouldn’t let him compete.

What happened? It may have had something to do with the fact that Moyer crashed so hard during qualifying that he flipped his car multiple times and slammed into a wall. Luckily, the True Blood actor escaped unscathed and even qualified for pole position!

“It was a surreal experience — it felt like a roller coaster ride when my car flipped,” Moyer told reporters.

But that surreal experience was all too real for those depending on Moyer for their paychecks. The actor was forced to withdraw from the race, which is run for charity, after the cast and crew of True Blood told him they would rather not kill off his character in the event of his own untimely demise.

“While I’m disappointed I won’t be racing today, I know it’s in the best interest of my True Blood family,” he said. “I look forward to cheering on my fellow racers and following all the race-day action.”