Cee Lo Green stormed off the stage at Coachella after his sound was cut when he showed up mega late. 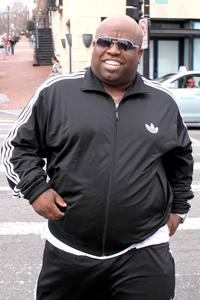 Cee Lo Green majorly ticked off fans — and Coachella organizers — when he showed up late for his set, then stormed off stage when his sound was cut to keep the schedule going.

Fans became restless waiting for the Crazy singer for over a half hour in the blistering desert heat. When Cee Lo finally arrived, he blamed being tardy for the party on everyone but himself.

“Sorry guys, I just landed,” he told the crowd. “Y’all still gonna party with me? I only have 20 minutes. It ain’t my fault. They should have… given me a better time slot.”

Cee Lo launched into the adult version of his hit Forget You, seemingly directed at Coachella organizers, then followed with five other songs before his sound was cut in the middle of a cover of Don’t Stop Believin’.

“It’s all my fault. Blame me,” Cee Lo said sarcastically before storming off the stage to a symphony of boos from the crowd, leaving his band behind to play instruments that could no longer be heard in the audience.

No comment thus far from the Cee Lo camp on the incident.