Charlie Sheen is reigniting his custody fight after Brooke Mueller landed back in rehab. Does he have a case? 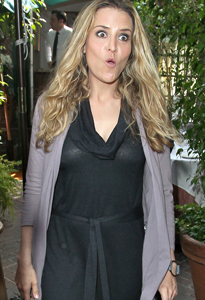 Charlie Sheen wants custody of his twins after Brooke Mueller fell off the wagon hard last week and refused to take a mandatory drug test.

Friends of Brooke Mueller expressed extreme concern when the mother of twins completely fell off the radar last week — she dumped the kids with her mother and stopped returning calls after begging pals for urine samples. She was later seen at a seedy pawn shop trying to sell an expensive men’s watch — possibly something from Charlie’s personal collection — and a stereo, despite the huge settlement and child support check she receives from the actor.

The kicker came when Mueller refused to submit to a court-ordered random drug test on Friday. According to her child custody settlement agreement with Sheen, both parties are required to submit to random testing, and any refusal counts as a dirty test.

What does this mean? Charlie Sheen has a great chance of getting back custody of the twins. Despite the actor’s ranting, raving, weirdly stream-of-consciousness semi-successful stage shows and delusional thoughts of getting back on Two and a Half Men, by all accounts he actually has been clean and sober since his rehab-at-home.

In what appears to be a pre-emptive strike, Mueller entered rehab for the dozenth time or so over the weekend — but it may be too little, too late. Sheen’s lawyer will be asking a judge to make Brooke hand the kids over to him full time while she’s back in treatment.

“Charlie has had enough with her excuses, period,” said a Sheen source. “Brooke refused to take a random drug test. Charlie’s attorney will use that as evidence that the boys are better off with him than with Brooke.”