Hollywood’s hottest stars are admitting their love for Glee, and Penelope Cruz is the latest. 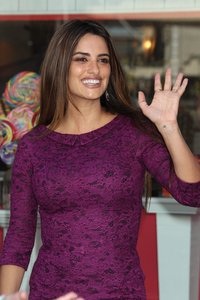 You wouldn’t take one of Hollywood’s most beautiful women for a Gleek — but she is! Penelope Cruz is a big fan of Fox’s hit show Glee!

The actress recently revealed her love for the hit show to Entertainment Weekly, something she shares in common with hubby Javier Bardem.

“It’s actually the only thing that I watch on television,” Cruz gushed in regards to Glee.

Kudos to the new mom for finding the time to watch the musical stylings of Glee with her new mommy role taking over! Does Penelope Cruz have any interest in guest starring though?

She did perform her fanny off in Nine, so maybe. “Gwyneth was amazing,” said Cruz of Paltrow’s part on Glee. “She was so funny and she has such an amazing voice. And once you’ve done a musical you always want to do it again. I would love to do more musicals, in TV or film. Not on Broadway, because I’m not brave enough to do that yet. But I love musicals.”

Fingers crossed, people! Maybe in the coming months we’ll hear a Glee-Cruz team-up is in the works!

What would you think of Penelope Cruz on Glee? Her performance in Nine did garner her an Oscar nod, so we have no doubt she’d kill it!