The animated film Rio took down Scream 4 in this week’s box office battle.

Rio, the high-flying tale of Blu the macaw, flew into the number one spot at this weekend’s box office, taking in an estimated $40 million in ticket sales. Blu the bird’s journey cost an estimated $90 million to make and so far has the biggest opening weekend this year. 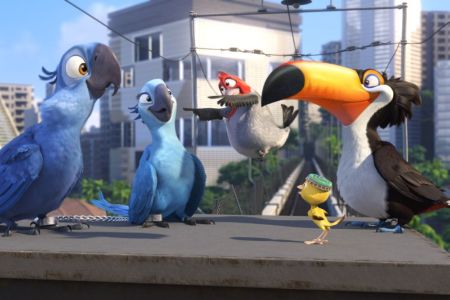 The highly anticipated debut of Scream 4 took in less than the 2000 opening of Scream 3. Scream 4 scared up $19.2 million with Ghostface the killer coming in second at the box office.

Another animated film, Hop, took the third spot with $11.1 million, giving it a running total of $82.6 million. Soul Surfer and Hanna rounded out the top five with $7.4 million and $7.3 million respectively.

Source Code brought in $6.3 million, while The Conspirator opened to $3.9 million. Your Highness rounded out the top ten with $3.8 million, bringing its grand total to $15.9 million.

Did you see Rio or Scream 4 this weekend? Tell us which one you thought deserved to be at the top of the box office. A tale of a bird facing his fears or a crazy killer on the loose?