At least one thing is going right in Christina Aguilera’s life these days — the DUI charges against her boyfriend Matthew Rutler have been dropped by the DA. 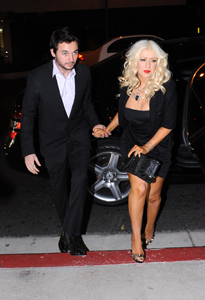 This hasn’t been the greatest year of Christina Aguilera’s life. A divorce, cheating rumors, Burlesque bombed, messing up the national anthem at the Super Bowl, falling on stage at the Grammys then being taken into custody by cops for public intoxication while her boyfriend was arrested on DUI charges are all great tabloid fodder but enough to drive a girl to drink when it happens in real life.

At least something is looking up for Christina Aguilera these days. Those DUI charges against Matthew Rutler have been dropped!

The Los Angeles County District Attorney rejected the charges against Rutler, citing insufficient evidence to prosecute him for the crime.

So what happened? Turns out Rutler was not legally drunk at the time of his arrest. His blood alcohol content came in at .06 — below the California legal limit of .08.

While Christina was taken into custody at the same time as Rutler, no charges were ever brought against her. Cops say they took her back to the station because she was too drunk to care for herself and no one was around to take her home while Rutler was being processed.

Aguilera and Rutler met on the set of Burlesque, where he was a set assistant.