Paul McDonald may have been voted off American Idol but he still holds first place in one girl’s heart. The singer is dating Twilight actress Nikki Reed! 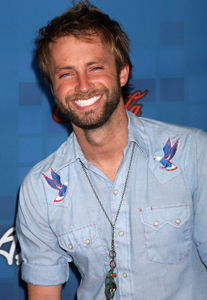 Paul McDonald was sent packing on last night’s American Idol, but he didn’t go home alone. The singer officially announced today that he is hot and heavy with Twilight actress Nikki Reed!

“Yes, me and Nikki are dating. It’s officially true,” Paul told E! Online. “She’s super cool. She’s super smart, so I’m happy with it. We’ve been hanging out here and there. We’re both pretty busy, but it’s been fun so far.”

So how did this seemingly random coupling happen? The pair met on the red carpet at the premiere of Red Riding Hood, and soon Reed was spotted at American Idol tapings — and backstage visiting McDonald!

Paul won’t be sitting around twiddling his thumbs or going home after his American Idol experience. He already has musical plans in the works, and with the help of his muse Reed they should be fab!

“It’s good to be an artist that can write and showcase what you do as an individual,” he said. “That’s something I always wanted to do because that’s my main thing. I’ve been writing tons of material while I’m out here, which I probably shouldn’t have and that’s why I got kicked off already, but I’ve been focusing a bunch on writing and working hard on stuff that’s coming out after Idol.”

Chances are good you’ll see McDonald on the American Idol summer tour — and keep an eye open for Reed in the wings.