Gwyneth Paltrow is pretty darn hot for a 38-year-old mother of two. How does she get that fabulous, fit body? According to the star, she ‘works her ass off.’ 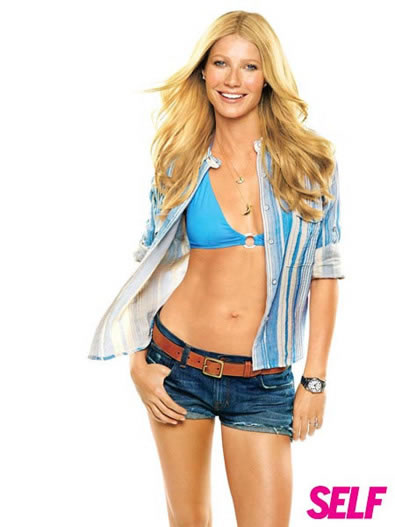 Gwyneth Paltrow, just like most moms, realized something after having two kids — her body was not what it used to be.

That realization, along with a short bout of post-partum depression, encouraged the mom of Apple, 6, and Moses, 5, to live a healthier lifestyle, including a strict exercise regimen of working out five days per week, minimum.

The results have paid off. This month Paltrow sports a blue bikini top on the cover of Self Magazine. But make no mistake — girlfriend likes to eat! Paltrow told the mag she does not count calories. If she wants pie, she’ll just compensate by tacking on some extra hours in the gym.

See Gwyneth’s full article in Self, plus get her favorite recipes and workout moves>>

“I think that a lot of people don’t want to put in effort and it’s easier not to change, not to do something good for you, not to work on your relationship, not make yourself a meal, not work out. They’re just pissed off at someone else doing that. Everything that’s in my life that’s good is because I worked my ass off to get it and maintain it.”

Meanwhile, for those of us who envy rather than resent, there’s a way to get Paltrow’s results in front of your own screen (though you do have to get off your chair). Courtesy of Oprah, Paltrow’s workout routine is posted in video glory here.

Celebrity secrets: How to lose the baby weight
Gwyneth Paltrow gets a record deal

Photo courtesy of Self Magazine