Kelly Clarkson made her way back Thursday night to the place where it all started: American Idol. What does she have to say about Casey Abrams?

Kelly Clarkson made her return to the American Idol stage last night to perform her country hit Don’t You Wanna Stay with Jason Aldean. The singer wore a fitted black dress as she belted out the song — and she sounded as amazing as ever. 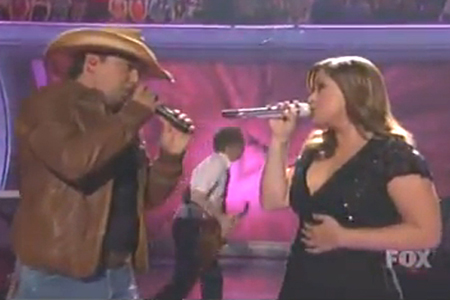 Idol host Ryan Seacrest introduced Clarkson as “someone the world knows as the platinum-selling Grammy winner, but to us she’s the girl who started it all.”

She took the time to take a few jabs at Seacrest about her tweets.

“You keep rephrasing them,” she said, referring to something she wrote last week about American Idol finalist Casey Abrams.

“I might have a bit of a crush on Casey on American Idol this season. He’s super cute and obviously super talented. Great job tonight man!” she tweeted.

She added to her admiration last night.

She followed up her performance with a Friday morning tweet.

“I had such a great time on Idol last night. I had fun singing with Jason and I love that every time I go back to Idol the set is even bigger! It’s so funny to me that this show has just become a monster,” she wrote. “All of the contestants are super talented but I can’t help but root for Lauren! She has such an amazing texture to her voice. Regardless of who wins I can’t wait to hear some music from some of them.”

We’re sure the Idol contestants are so excited to get the stamp of approval from the original American Idol.

We love her — and we can’t wait for a new album from the singer.