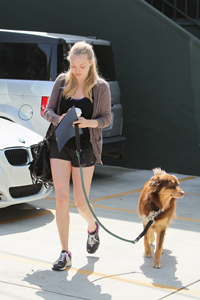 When people come into money they often buy themselves things they dreamed of having as kids. What little girl didn’t dream of having her own horse? Amanda Seyfried is no exception, so she took some of her millions and went and bought herself one.

The difference between you and Amanda Seyfried is that her horse is dead. She bought it that way.

The actress has a penchant for taxidermy, it turns out.

“I love good taxidermy, it’s like art,” Seyfried told the Daily Express. “A lot of people think it’s weird but I don’t know why.”

Antoine is a miniature horse that died when he was just three weeks old. Seyfried picked up her strange little conversation piece when she was in London promoting Red Riding Hood.

“It’s being shipped to L.A. as we speak,” Seyfried told the UK Press Association. “And it’s going to be Finn’s [Seyfried’s dog] new best friend unless he tries to eat it.”

read on for more amanda seyfried