The ex-wife of Charlie Sheen has fallen off the wagon and may be close to hitting rock bottom, say pals of Brooke Mueller. 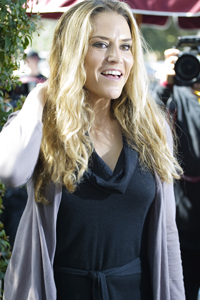 Brooke Mueller has fallen off the wagon and has passed Charlie Sheen’s twins off to her mother, say pals. Friends are worried that she is about to hit rock bottom!

A source close to Brooke told RadarOnline, “Brooke admitted to relapsing. She hasn’t been returning calls, which usually means she’s using. She’s absolutely freaked out that this potential dirty test could result in her losing custody of their two-year-old twins (Bob and Max) to Charlie.”

By all accounts, Charlie has actually been drug-and-alcohol free since the blowout that got him fired from Two and a Half Men, and allegedly, he even kicked Brooke off a vacation with his goddesses because he caught her using drugs.

Sources say Brooke was calling friends earlier this week begging for urine samples she could swap out with her own in case of a random drug test. She and Sheen must undergo testing as ordered by a judge in their child custody case.

Then Brooke was caught on tape at an Inglewood, California pawn shop trying to hock an expensive man’s watch and a stereo, but was turned away for lack of ID. Remember, this is a woman who rakes in $55,000 a month in child support and landed a multi-million divorce settlement.

Wonder what she’s spending all that money on?