Susan Lucci is saying goodbye to one of daytime television’s most iconic characters after it was announced yesterday that All My Children would be canceled. 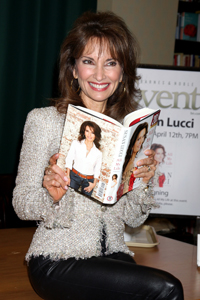 Susan Lucci played the scheming Erica Kane for 31 long years, but soon fans will have to look elsewhere to get their Lucci fix. With the announcement that the once-wildly popular soaps All My Children and One Life to Live are being canceled, Lucci and a whole lot of other actors will be looking for new jobs.

Susan Lucci issued a statement — a very gracious one, under the circumstances — thanking All My Children for such an amazing career.

“It’s been a fantastic journey,” said Lucci in a statement. “I’ve loved playing Erica Kane and working with [show creator] Agnes Nixon and all the incredible people involved with All My Children. I’m looking forward to all kinds of new and exciting opportunities.”

The actress was named Daytime’s Leading Lady by TV Guide and is the highest paid performer in daytime television, raking in a rumored $1 million a year. She appeared as Erica Kane on the very first episode of All My Children back in 1970 and is the only remaining original cast member.

And yes, after 18 nominations Lucci finally won her Emmy back in 1999.