Bonnie and Klaus went head-to-head this week on The Vampire Diaries where nothing was as it seemed. Did the witch make it out alive this week? Yes and no — read on to find out why.

Each new episode of The Vampire Diaries brings us closer and closer to the epic season two finale we know is coming. But before we can even wrap our heads around the finale, we had to get through this week’s episode and the indirect introduction of Klaus. 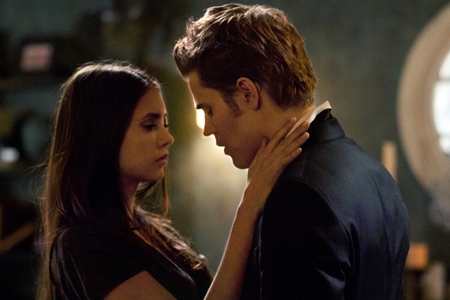 Another decade dance, another massacre on The Vampire Diaries. You would think our favorite vamps would have learned a lesson from last year’s decade dance but apparently not. This year’s ’60s inspired dance prompted another new episode properly titled — The Last Dance.

Klaus, still in Alaric’s (Matt Davis) body, held Katherine (Nina Dobrev) hostage while his warlock helped him prepare to fight Bonnie (Katerina Graham) in a battle of the ages. The oldest vampire alive played a sneaky game of cat and mouse, making his presence known in a creeptastic way — through Alaric’s students. Klaus sent a message to Elena (also Nina Dobrev) that was heard loud and clear by everyone — he’d be at the dance.

Klaus left nothing to chance, figuring out Bonnie had not only her powers back but the power of the dead witches. Knowing she could kill him with her powers, he decided to bait her into using all her powers so that it would kill her while he was under a spell that would make him outlast her.

Klaus wasn’t the only one with a plan — it just wasn’t as good. Damon (Ian Somerhalder) and Stefan (Paul Wesley) planned to lure Klaus out at the dance and surprise him with a sneak attack courtesy of Bonnie. We can all see the problem in that plan — Klaus knew what they were up to.

TVD: Dancing with the vampire known as Klaus

Everyone showed up to the dance ready to boogie. Side note — who was completely in love with the scenes of Damon and Alaric shaking their tail feathers? It looked like a fun time until Klaus created the ultimate diversion and Damon found out Bonnie’s powers could kill her.

With everyone but Elena figuring out Bonnie could die, Jeremy really began to worry about his girlfriend, but that was the least of his worries.

Klaus used his powers to compel a few high schoolers to beat Jeremy up, forcing Stefan and Damon to leave Elena’s side. Time for Klaus to make his move. He lured Bonnie and Elena to a secluded classroom and revealed he had taken over Alaric’s body — and that he knew Bonnie’s little secret.

The girls made a run for it straight into Damon’s path and he sent Elena for Stefan. This is where it gets truly brilliant! Damon asked Bonnie if she was still willing to do anything to save Elena and the next thing you know she’s battling Klaus in a showdown that left the witch dead — so we thought.

TVD: Don’t be fooled by the dead witch in the trunk

With Elena in complete pain over her best friend’s death and Damon loading Bonnie’s body into a trunk, it was hard to process it all. Elena confronted Damon with a slap but he revealed the whole thing was done to make Klaus think Bonnie was dead. She put a spell on herself and was being housed in a safe place! She was reunited with Jeremy in a super-cute moment.

Damon bluntly told Elena that if he had to choose again Bonnie would die: “I will always choose you.” Damon totally loves her!

Twist of the episode — Elena crept down into the dungeon where Elijah is stored and pulled out the dagger!

Did you love The Vampire Diaries episode The Last Dance? What do you think Elena wants with Elijah?