SheKnows takes you all over the world for two premieres of the new Fox animated film Rio. First, our Senior Entertainment Editor Joel D. Amos journeyed to Rio to attend the world premiere of the film, the first ever held in the Brazilian city. Then, one of our contributing entertainment writers, Kim Grundy, worked the U.S. premiere of Rio at Grauman’s Chinese Theatre in Hollywood. We bring you the full report from all corners of the globe.

Arriving on the scene, it was clear this was not your usual movie premiere. After attending dozens of premieres, I was impressed with the level of pride exhibited by the residents of Rio in celebrating not only a movie whose title shares the city’s name, but the fact that Hollywood had come to Brazil to mark the achievement of a movie 10 years in the making. 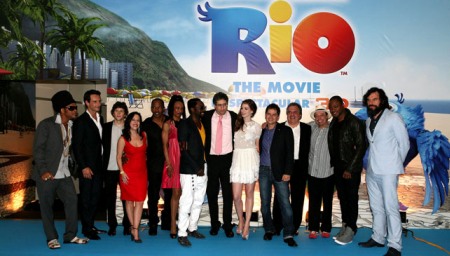 We were front and center on the Blu carpet (yes, the carpet was blue, but the event was named for Rio’s lead character named Blu) at a 10-screen Cineplex in Rio that had turned over its entire operations to the film premiere. There were thousands in attendance from the mayor of Rio to Brazilian celebrities that sent the Brazilian paparazzi into a tizzy.

We spoke with Rio stars Anne Hathaway and Jamie Foxx on the premiere carpet and it is with pleasure we bring you those interviews.

But first, we have some incredible footage of the sights and sounds of the city of Rio — a locale we soaked in for four days. We hope that this video intro to the Rio premiere provides some sort of feeling as to the wonder that is…Rio!

I was thrilled to be invited for my first red carpet (or, in this case, “Blu” carpet) premiere for the movie Rio at Grauman’s Chinese Theatre in Hollywood, California. The atmosphere was electric as fans lined up across the street to cheer on the arrivals of their favorite stars, including Anne Hathaway, Jesse Eisenberg, Will.i.am, Jamie Foxx and Leslie Mann. 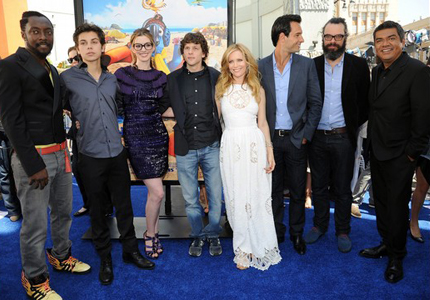 Anne Hathaway, who voices the macaw Jewel in Rio, mixed high glamour and fun in an embellished purple Gucci gown with her hair pulled back in a ponytail and chic glasses. She later told reporters that she had a contact mishap and the glasses were a last minute decision. She appeared relaxed and happy as she worked the blue carpet, chatting with reporters and taking pictures.

Jamie Foxx had fans in an uproar when he crossed the street to sign autographs, while George Lopez took the time to chat with the 13-year-old reporter standing next to me. She even gave him some Silly Bandz, which he put on! 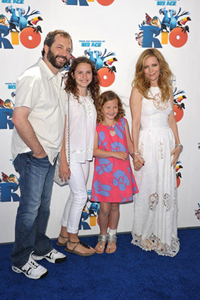 Leslie Mann looked beautiful in a white Dolce & Gabbana gown — and she brought her mega director-husband Judd Apatow and their two adorable girls, Maude and Iris. Her two girls even stood by the large cardboard cut-out of Mann’s Rio character, Linda, and posed for pictures.

Check out my interview with Leslie Mann here >>>

Also spotted on the blue carpet were Tracy Morgan and a barely-recognizable Jemaine Clement (Flight of the Conchords) sporting a thick beard and long hair. The Farrelly brothers (Dumb & Dumber, There’s Something About Mary) were spotted waving as they walked into the theater.

It was so amazing to watch Rio — with (most of) the stars of the movie! As their names flashed on the screen, we all clapped and cheered — and I have to admit, I felt pretty VIP! Walking out, I even spotted George Lopez and Jesse Eisenberg watching the movie credits with their 3D glasses still on.

The movie was awesome, the stars were amazing — and I’m still pinching myself that I was there!