Prince William was just looking for some grub when he stopped into a restaurant in Anglesey, Wales, with his friends. So, why was he turned away? 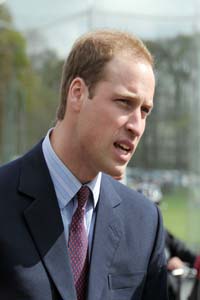 Apparently Prince William doesn’t have the same sort of pull in Wales as he does in London. The groom-to-be was turned away from a restaurant in Anglesey, Wales, on Sunday night.

Turning away the future King of England? Off with their heads!

OK, it wasn’t that scandalous — the restaurant wasn’t able to accommodate the party of 20 people from William’s military group.

“The plan was to eat there, but unfortunately they had one of their chefs off sick so they weren’t able to cope with the number that we had brought, ” the operational commander of William’s unit, Squadron Leader Iain “Spike” Wright, told the Associated Press. “And so we found another location and we moved on.”

The restaurant ended up calling another restaurant to find a place for the group, local businessman Jonathan Campbell said. Prince William and his clan ended up dining at the Trearddur Bay hotel.

“They thought it was a joke that it was Prince William and his buddies and they had to ring three or four times and say ‘No, this is real,'” he said.

Campbell didn’t have much sympathy for Prince William’s situation.

Would you turn Prince William away from your restaurant?

Read on for more Prince William