Charlie Sheen said that he’s in talks to rejoin his hit sitcom Two and a Half Men. Should we believe him? Warner Bros. says Sheen is lying. 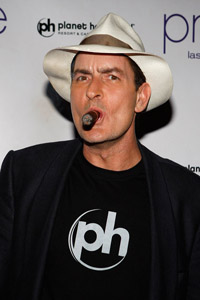 Charlie Sheen’s tanking My Violent Torpedo of Truth tour has the actor waxing poetic about a return to his hit CBS show, Two and a Half Men. Sheen’s gone so far as to say he’d apologize to his nemesis, Chuck Lorre, on stage. Now, he says there’s discussion about a return to the show.

“There’s been discussions, but I was asked not to divulge anything,” Sheen told a Boston radio station on Tuesday night. “Had they told me at the end of season eight that that behavior wasn’t going to be cool, I would have adjusted it.”

That would be an amazing turn of events if it was true. Now, Warner Bros. is lashing out against Sheen — they’re even calling him a liar!

“Those statements are false. As you know, there have been no discussions, there are no discussions and there will be no discussions, regarding his returning to or having any involvement with the series,” lawyers for Warner Bros. wrote to Sheen’s legal team.

So what’s the deal?

“What’s going on here is I wrote a demand letter about Charlie not being paid for the first seven seasons,” Singer added. “This is the response. Those episodes have nothing to do with this dispute and Charlie should be paid accordingly.”

Well, who really knows what the truth is? However, Sheen isn’t exactly the most trustworthy person at this point, so we’re inclined to believe Warner Bros.

Do you even care if Charlie Sheen returns to Two and a Half Men?