There are your basic hot Hollywood hookups, and then there are the A-list pairings that knock every other star couple out of the water — the couples who are famous in their own right, but whose combined stature makes them unstoppable as a twosome. Here are our nominees for the top four most popular, influential celebrity couples. 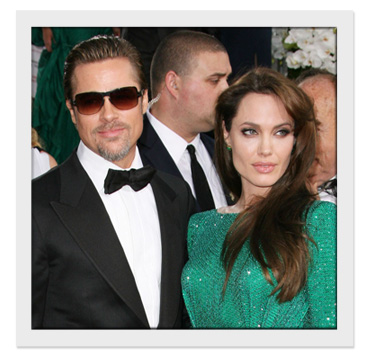 At the top of the list — of course — are Brad and Angelina, who were already megastars before they met and fell in love on the set of Mr.and Mrs. Smith. Jolie became as famous for her acting chops as her attention-grabbing antics and off-the-wall marriage to Billy Bob Thornton. That colorful past came to a close when she adopted a child from Cambodia in 2002 and started a life with Pitt — arguably one of the most recognized, famous big-screen stars the world over. Pitt and Jolie are not only two of the most beautiful stars out there today, but they also boast impressive humanitarian efforts, acting awards, and an ability to hold the public’s interest like no other couple.