Sergio Mendes is not only a legend here in Brazil, but worldwide as the hitmaker is intertwined in music history on so many levels. For one, he is the “M” in A&M Records and its roster of artists ranks among the world’s bestselling performers. Then, there are his own hits, including The Look of Love and Brasil 66, plus the work he has done with legendary artists from Frank Sinatra to Justin Timberlake.

Taio Cruz has been creating hits in his native UK for years now. In the last year, he has seen his star rise meteorically in the U.S. with hits Break Your Heart and Dynamite. Cruz is paired with Mendes for our exclusive video interview — a match made in heaven. Sergio Mendes is the executive music supervisor for the film Rio with Cruz lending his voice to the soundtrack. 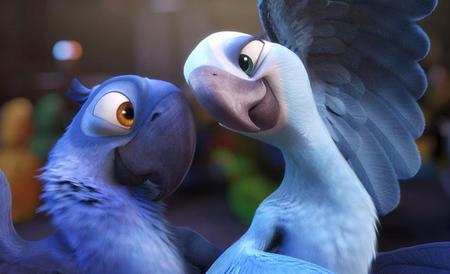 Rio opens in theaters April 15 and tells the story of Blu (Jesse Eisenberg), one of two rare blue macaws left in the world, who must go to Rio to mate with Jewel (Anne Hathaway) in order to save their species. The film, as directed by Carlos Saldanha (Ice Age), is a love letter to his hometown of Rio. The use of Mendes, a Brazilian icon, as the leader of the music in Rio is a brilliant stroke by Saldanha.

Mendes opens up about what it means to him as a Brazilian to have a movie solely celebrating Rio and Cruz chimes in on how it feels to finally be embraced by American audiences!