Padma Lakshmi is pretty fed up with the scandal surrounding her nude photos. It’s no big deal — her daughter sees them every day. 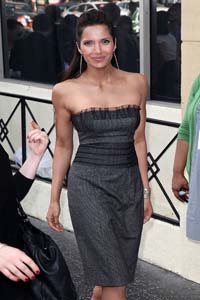 Top Chef host Padma Lakshmi caused a controversy in 2009 when she posed for several naked shots for Page Six magazine. She told Fox News’ Pop Tarts blog that she doesn’t see the problem.

“I think those are beautiful pictures and they hang in our design studio and my daughter passes those pictures every day,” Lakshmi said during an event in Times Square. “I think a woman’s body is one of the most beautiful creations on this earth and it’s not what you do, it’s how you do it. Michelangelo did nudes too. There’s a difference between a beautiful photo and an exploited photo, and I don’t believe there’s anything exploited in the photos that I’ve taken.”

In fact, the television star and jewelry designer is pretty fed up with the rumors.

“I have been working hard all my life ever since I got out of college to build a career with my own hands and own mind and you would think that that would be enough to talk about. Being an immigrant in the country, being a woman of color, but just being a hard-working person that’s just trying to do something in life that’s using their head and their effort should be enough. I don’t think you have to go ‘there’ and if you dig deep enough into anyone’s life, you’re going to find all kinds of things.”

We totally get it — it seems like people only pay attention when something scandalous is going on.

Lakshmi also said she loves being a mother, despite the loss of sleep. Will she allow daughter Krishna to pursue a career in entertainment when she’s older?

“If she asks to be involved in that before she’s 18, then I will judiciously discuss it with the rest of her family and make that decision after she’s 18 or after she’s gone through college or when she’s 21 or 22. I would encourage going about it that way,” Lakshmi said. “Krishna is her own person and she will become who she is going to become and we will navigate that road when we get there.”

Do you agree? Are Padma Lakshmi’s nudes no big whoop?