Is Kim Kardashian ready to get married to Kris Humphries? Seems like it, according to a new interview she gave to Life & Style. 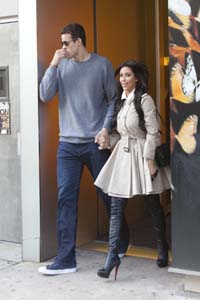 “I’ve envisioned the whole thing,” Kardashian told Life & Style in their new issue. “I can’t wait to get married. I’ve found my wedding dress — I mean, I already know what my gown is going to look like. I’ve thought about it all for so long. What woman hasn’t thought about her wedding since she was a little girl?”

And the wedding ring?

“I want Lorraine to design me a big diamond ring,” Kardashian reportedly said recently to a friend, referring to friend and jewelry designer Lorraine Schwartz.

“Her idol is Elizabeth Taylor, who was a good friend of Lorraine’s, so she wants to take inspiration from one of Elizabeth’s prized possessions: her famous cushion-cut Krupp diamond. Kim’s been talking to Lorraine about it a lot lately,” said a source.

“I think I’ll name my kids with K’s to keep the tradition going,” Kardashian said. “I want a big family. Three to five kids!”

Whoa, girl! Calm down with the marriage talk. Sure, Humphries might really be the one — but a lot of guys will run screaming in the other direction when marriage talk comes up. We’re hoping her dream comes true, we just hope she’s not setting herself up for another heartbreak.

Do you think Kim Kardashian is a little premature with all the marriage talk?