Their fans may never agree on which franchise is the best, but the actors have put all competition aside and made a love match. Two of the actors from the Twilight and Harry Potter films are engaged! 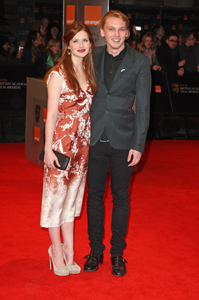 While rumors continue to float that Robert Pattinson and Kristen Stewart are engaged, broken up, pregnant or all three, a true life love story has unfolded between the Twilight and Harry Potter camps.

Jamie Campbell Bower, who plays Dumbledore’s nemesis Gellert Grindelwald in Harry Potter and the Deathly Hallows Part 1 and 2 as well as Caius of the Volturi in The Twilight Saga: New Moon and Breaking Dawn, is engaged to Bonnie Wright, who plays Ginny Weasley in the Harry Potter flicks.

That’s a lot of mega movie franchise in one home!

While rumors of the couple’s engagement surfaced last spring, this is the first time either of the actors have publicly confirmed the happy news.

In addition to appearing in the two biggest franchises of his generation, Bower has also landed the role of King Arthur in the new Starz series Camelot.